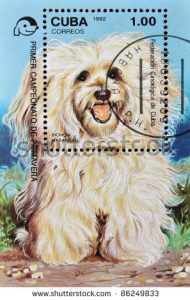 The breed’s history is unique and interesting, as the breed itselve. This breed is actually very old and has roots in the west Mediterranean. With the colonization of Cuba (which started in 1492) by Spain, the first settlers brought dogs with them to keep them company. From old ship logs, people concluded that the dogs (now known as Havanese) originated from the Tenerife from where the first colonist arrived.

Most people today consider the Tenerife as the native country of the whole Bichon family. Considering most colonist ports in that region had strict restrictions imposed on them by Spain the Tenerife was the only port eligible to Cuba for trade. The assumption is that these small dogs (which were already favorites in the homes of Spanish aristocracy) arrived to Cuba during this period. As the years passed by the little dogs adapted to the tropical climate of Cuba. Their coat was long and silky and provided them with a good isolation from the severe heat and protection from the harsh sun. Because of that they were also known as the Havanese silky dogs and Spanish silk puddle. The Cubans firmly believed that their coats are protecting the small dogs from the harsh sun so they never trimmed or cut off their coat, and they never tied their bangs either.

The nobles of Cuba adored these dogs and admired their lavish coat and elegant appearance. 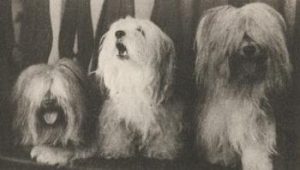 Up until the 18th century Cuba was the cultural capital of the new world. European aristocracy considered Havana as the perfect vacation destination. After their return to Europe they brought the charming little dogs with them to the courts of Spain, France and England. They conquered the courts with their small size, elegant appearance and irresistible playful nature. In Spanish courts and in the court of Loui VIII they were groomed like poodles, however the English preferred their natural look so they didn’t cut their coat.

By the middle of XVIII century the Havanese became the trendy breed that everybody wanted to have. Charles Dickens had one and even queen Victoria got two adorable Havanese pups. They were so famous that they were mentioned in the journals from the very first European dog shows were they were shown and what characteristics they must have.

Meanwhile, on Cuba the aristocracy class slowly disappears and a new class emerges – the bourgeoisie. But the change does not decrease the small Havanese dog’s popularity. They adapted quickly and from the elegant court show dog they transforms in to the favorite adorable family pet which they continue to be for the next 150 years.

With the development of Cuba and its revolution 1958-1960, the breed was in danger. While immigrating to America people were able to bring only some of these lovable dogs with them. All Havanese dogs today (not counting those from East European countries and those that stayed in Cuba) are descended from those 11 small dogs that the immigrants brought with them to the soil of USA.

The most unbelievable fact is that despite all of the travels this breed had thru out its history its physical characteristics had more or less remained the same. When you compare the dogs today and the one from the pictures painted in the 18th century there are very few differences.

Taking all that in consideration it is obvious that the goal must be to keep preserving these small dogs as they are in the future.